MANY INSPIRATIONS COME TOGETHER IN ONE FANTASTIC FALL 2012 SHOW 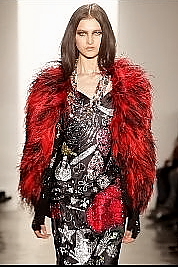 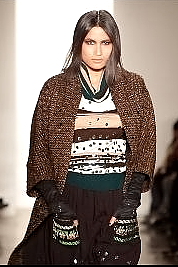 One thing you could never accuse Libertine designer Johnson Hartig of is a lack of exuberance, in life and on the runway.  His enthusiasm lights up a room, just as the bedazzling on his vintage looks light up the runway.  For Fall/Winter 2012, Hartig took his inspiration from so many places:  old fashioned Cockney Pearlie Kings and Queens, punk rockers reborn, infused with a touch of India (he promises more of that next season). 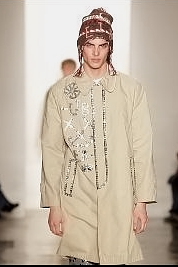 The makeup, by Chantel Miller for MAC, mirrored the many textures of the clothes.  Miller described the Libertine girl as, “sophisticated, the modern nomad.  She’s such a nomad that she never went home. This is the makeup she had on last night, but now it’s morning.”

Johnson’s always shown his collections in small venues, to a select crowd of friends and followers, but this season, he told me, he’s “taking it to another level, and he’s ready to break out”.  I hope so.  Everyone needs to see the magic that is Libertine.

To see video from Libertine’s Fall 2012 runway click below. Produced by Red Stiletto Media for Libertine