There is something about Zang Toi. How many people, in this day and age, are, simply, elegant? About how many men could you say, “he’s a gentleman”, and know you had bestowed upon them the most perfect compliment? Zang Toi is that man, gentle, soft-spoken, and oh, so talented.

For one thing, at every Fashion Week, photographers rushing to cram the riser are handed a box, containing a sandwich (actually assembled by Zang’s mom), an apple and a bottle of water. That seemingly small gesture means more to the crews than you can imagine.

Then, there are the clothes. On the woman’s side, tailored, feminine looks for strong, independent women. Each model looked like a character from a ‘40’s film noir, but with an edge that left no doubt this was the here and now. 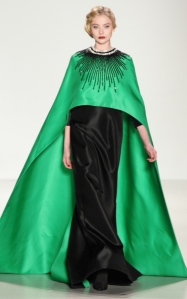 Big shoulders, the slenderest waists and sexy lengths combined in kick-ass suits. Think Ros Russell, not as “Girl Friday”, but CEO of a super-secretive multi-national. What started out in shades of grey and black, morphed into the richest emerald green, the deepest burgundy.

Trousers were cut a tiny bit wider in the leg, topped by jackets that were more mini-trenches in rich, luxurious wools. Fabrics were beautifully patterned and textured, embossed and embellished. There were even a few warm, plush capes to keep away the winter cold. 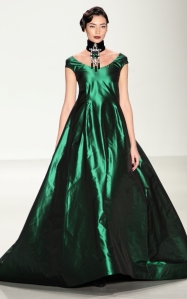 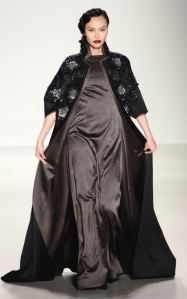 Then, there the gowns. And trust me, they were proper gowns, some skin-tight and Asian-inspired, others wide and regal, topped by long, flowing capes. This is where Zang Toi truly shines, sending down the runway a fantasy that we can all be empresses of the night, all that surround us merely our subjects.

His women’s wear is so spectacular, it’s hard to add the same adjectives to his menswear. All you can say is, this is the epitome of male elegance: suits tailored to the nth degree. What is the word for the Zang Toi man? Dapper? Suave? Sophisticated? All of the above. The man every woman wants to know, and every man wants to be (somewhere, deep down, even in the grungiest part of his soul).

I try never to miss a Zang Toi show. I feel honored to be invited, like I’ve been asked to a party in a part of society I’ve only ever been able to view from afar. But it’s a place I’d really like to be.