Season after season, I have begged for an invitation to b Michael AMERICA. This season, the fashion gods were smiling on me, my wish came true, and there I was, sitting in the Pavilion, waiting for the show to start. I wasn’t quite sure what to expect, to be honest. I wasn’t even quite sure why I fought so hard to see it. Then the show started, and it all became clear.

I had been opining the days when designer after designer showed beautiful, elegant, perfectly tailored looks that made me swoon. I wondered where so many of the craftsmen had gone, the designers who create fantasy. I could count on one hand the shows I had seen where clothes were breathtakingly beautiful, impeccably crafted. Then, on the next to last night of Mercedes Benz Fashion Week, I saw b Michael AMERICA.

The only word I can think of is “magnificent”. The exotic blend of fabrics and textures, the amazing colors, all combined to create a collection that is breezy, and elegant, reminiscent of a gentler, more beautiful time, yet completely current.

Flouncy floral sheaths and swingy dresses let you channel your inner Audrey Hepburn, while slim, body-hugging styles shined in the softest silk. Evening gowns were so elegant, ready-made for a red-carpet moment or a night out in Monaco. The colors ranged from the brightest whites to the hottest pinks and the richest jewel-tones. And, in the Pavilion, where you’re close enough to reach out and touch the fabrics, you can see where b Michael shines: craftsmanship. This is a couture-class collection where everything is just right, every stitch in place, fitted to the nth degree.

The colorful theme continued in his menswear, with suits, jackets and pants in creams, bright colors and florals. You might think that’s too much, but when you see the crisp lines and perfect tailoring, you realize it’s just right.

The show began with a film that showed b Michael’s dedication to the art that is fashion, and to the looks he puts down the runway. The proof was there on every model, in every piece. Just when I thought I couldn’t be any more dazzled, the final look made its way, slowly, through the labyrinth that is the Pavilion: a breathtaking blue and white shirtwaist, well, it was a ball gown, worn by one of the most beautiful models to grace the runways every season. Spectacular. 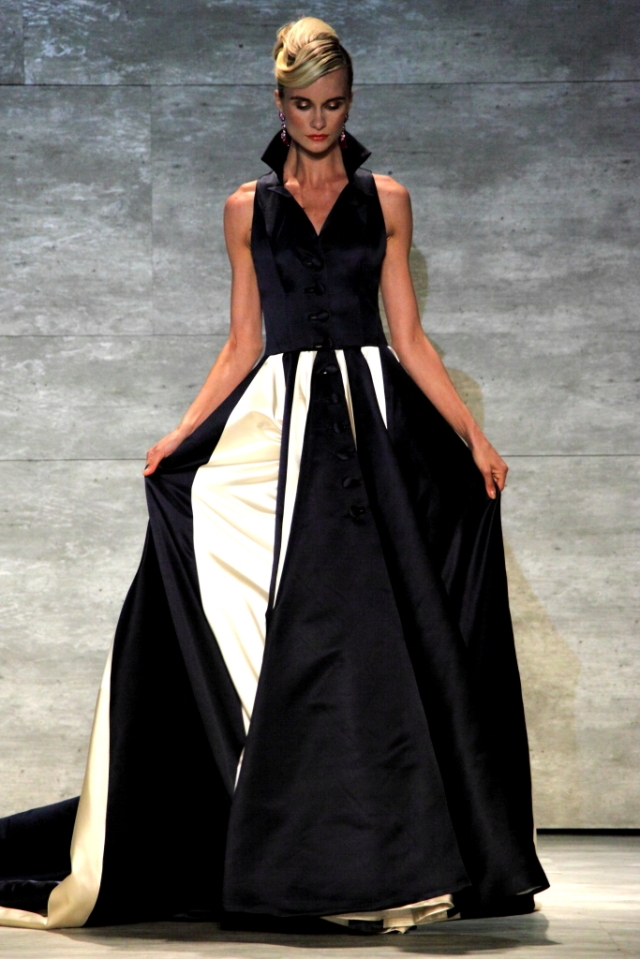 Will I ever reach the rarified air where I can actually afford to wear b Michael AMERICA? Probably not. But I feel privileged finally to have seen it walking down a runway.