When I think of the places in the world I would like most to see, Mongolia has to be in the top five. I envision exotic landscapes, mysterious natives and color everywhere. Seeing Bayarmaa Bayarkuu’s premier Mongol collection seriously fed that desire, giving me a small sample of everything I conjured in my imagination, in one, brief runway show.

It began with the stirring sounds of the morin khuur, a Mongolian stringed instrument, and a singer performing a kind of hip-hop tune. But it was the collection, itself, that showed Bayarkuu’s great love for her homeland, a respect for her culture and a design aesthetic that was just spot on. 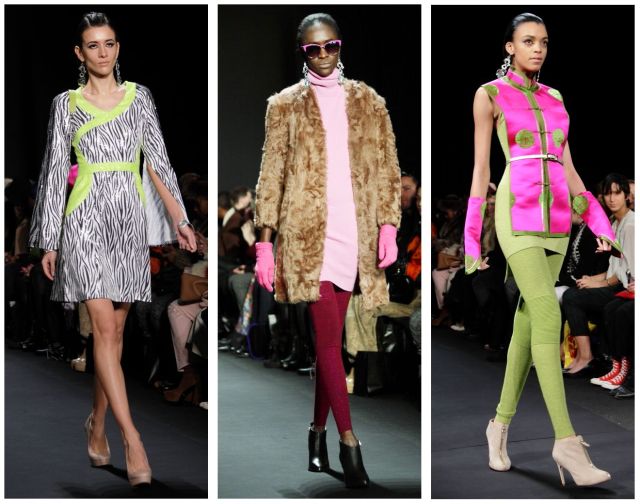 Bright ruby reds, emerald greens, shining golds, turquoise, amethyst and hot, hot pinks lit up the runway in bold patterns and Asian-influenced prints. The cuts were clearly inspired by traditional Mongolian costumes, with long, warm coats over simple, silky dresses. But they were made wearable for the modern woman.

Bayarmaa wasn’t always a designer. She holds a degree in business and finance, and ran her father’s company for several years. When she jumped into fashion, she did it with a conviction and an ethos that makes Mongol special.

When I spoke to her, post-show, she told me how exciting it was, making her New York debut, and talked about her interesting mix of textiles. “I used a lot of cashmere,” she said. “I’d say 42 pieces are 100% cashmere, and I used a very thick silk.” She also used Mongolian lamb’s fur, harvested with a twist. “They are not farmed,” she explained. “They are not slaughtered. They are fed in open range. We don’t kill them. When they pass away, that’s when we get the fur.” There’s a use of fur I can actually accept. It is a truly beautiful, exotic, compelling debut for Mongol, not quite a trip to Mongolia, but a great teaser. I hope, come September, she’ll bring us a taste of Spring in Ulaanbaatar.