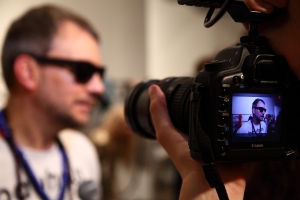 There is a real sense of whimsy that surrounds the Libertine Spring/Summer 2012 line.  The designer, Johnson Hartig, flits from place to place before and during the show, like a joyous spright.  The show itself, held at Exit Art,  started out as a presentation, then became a runway show that was, at first, serious, then with each walk (and the models walked about six times), it got looser, cheekier, and more fun.

The designs are pretty stunning:  vintage clothing which Johnson found, then silkscreened with bold, graphic patterns he created then applied himself, to thousands of pieces.  “I just started painting these graphics,” he told me.  “I just started putting them together, mixing them up.  I took them to the studio, and I just liked the look.”

From there, he matched pieces to patterns, creating a collection that was staggering in its simplicity.  He said, “I pick out a garment and figure out what will be most appropriate and most striking, and silk screen it.”  It’s as simple as that.  The look was stark, bold in black, white and gray.  And the job of creating hair that fit the retro looks fell to Redken’s Noah Hatton. 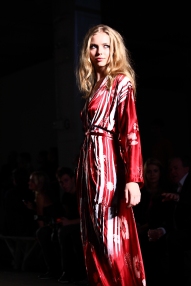 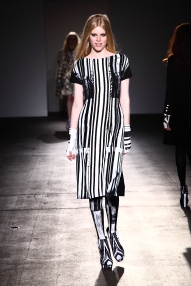 “The designer really wanted to have a woman who went out the night before,” he said, “then got up, and put her clothes on.  It’s a little disheveled.”  And, like so many looks we saw on this season’s runways, it was inspired by the ‘60’s.  He told me, “I think it’s going to be a trend for Spring.  So many designers are following along the same lines.”

The makeup, which perfectly captured the ‘60’s, Twiggy vibe, was by Charlotte Willer for Maybelline.  “The inspiration is very simple”, she told me, “it’s a street girl who’s inspired by the ‘60’s look.  And so we kept it super-simple, a black, smoky eye, and the edges are soft.” Barely-there lips let you appreciate the artistry of the eyes, but still managed to stand out, with a just-licked look and little real color. 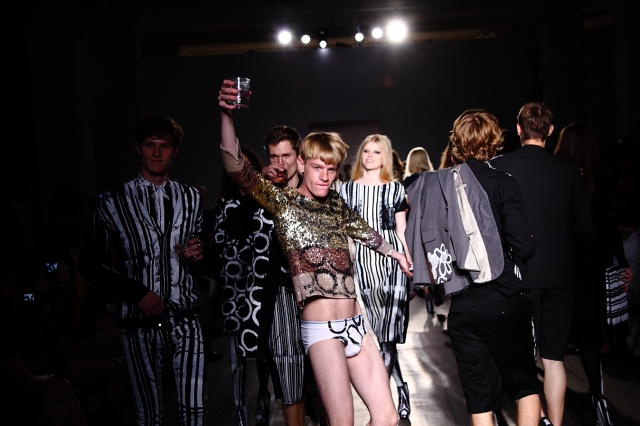 It all worked to keep the focus on the clothes, which were simple, monochromatic, yet bold enough to grab your attention.  Ask Johnson what his secret is to taking vintage pieces and turning them in to wearable art, and he’ll tell you, “that’s my eye. I’ve always had a really good eye.”  And a fantastic spirit that always makes Libertine one of the must-see shows, every season.

To view video of the collection and listen to backstage interviews, click here.

1 Response to GOING GRAPHIC WITH LIBERTINE