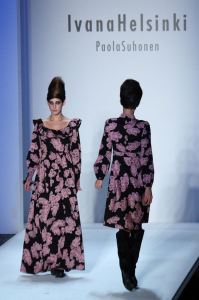 THE SCANDINAVIAN DESIGNER CHANNELS THE ‘60’S AND BARDOT

After eight long days and nights, Mercedes-Benz Fall/Winter 2011 Fashion Week came to an end.  The spotlight fell on Ivana Helsinki, and Scandinavian designer Paola Ivana Suhonen.  At the final hurdle, you can tell the dedicated fashion journalists and buyers who have trolled the Tents from morning till night, taking in every show they could wrangle and invitation for, from the designer’s friends or fashion fans lucky enough to score one invite.  The journalist/buyers look bedraggled, tired, more than a little pallid and shell-shocked.  The one-timers are dressed to the nines, and, the biggest giveaway, wearing heels.  Then there was the incredibly intoxicated woman in a long, black dress, trying to talk the guard into letting her in ahead of the cattle, as she was a “friend of the designer”.  I’ll bet he’s never heard that before.  Her cries of “pleeeeese, meeester, you must let me in” went unheeded, sadly for her.  She got her own back by stealing every gift bag she passed on the way to her (back row) seat. 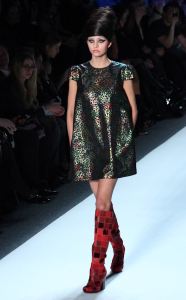 The real show was much more entertaining.  It started with a decidedly Scandinavian film (think Wallender without the murder, or the sullen detective.  Or the sound), a black and white romp through the forest.  That was scary.  But my fears were laid to rest when the film ended, the lights went up, and a line of beehive-coiffed models took to the runway in the most delicate Finnish knit dresses and jumpers. 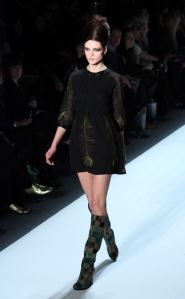 The dresses were flirty, adorable and gentle in basic black, for the most part, with occasional pops of white or gray.  The featured feather print was as delicate as the knits, in white on black, pink on burgundy or shades of green.

Suhonen said she was trying to channel a Scandinavian version of Brigitte Bardot, and that worked perfectly from the quiet sexiness in some of the pieces to the sweeping black eyeliner.  Every look was enhanced by the incredibly beautiful boots worn by the models.  With a patchwork print in shades of burgundy or shades of green and gold, they were absolutely stunning. And here’s the best part:  the knee-high footwear was part of a collaboration with Seychelles, so you know they’ll be affordably priced when they hit the stores in late July.