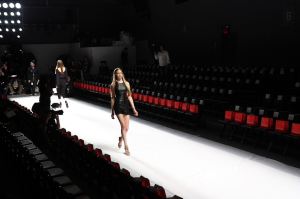 She is arguably South Korea’s number one designer.  But would Son Jung Wan find the same level of success here, in the Tents at Lincoln Center.  Well, judging from her New York runway debut, the answer is a resounding yes.  She certainly had all the elements:  a mix of soft, elegant glamour and rougher, wintry tweeds (there was also a lot of fur, but I’d prefer to just kind of ignore that), a truly winning personality, and a celebrity-filled front row that included Alan Rickman, reality star Aubrey O’Day, Kristi Yamaguchi and Miss J. Alexander.

With the help of a translator, she told me her inspiration was ‘70s movies.  She said, “it’s all about glamour, being playful, being experimental about being creative.  That’s the kind of girl I have in mind when I’m designing, playful yet elegant, sexy and glamorous.”  And it all showed in her collection, filled with metallics, shimmering sequins and lots of beading in unexpected places, like on a see-through top tucked under a tweed jacket.  There was a soft, creamy silk evening gown with a deep neckline, soft, silky pants with wildly wide flares and a tweed belted pants suit that was so sophisticated.  She even showed a few menswear pieces.

She is so genuinely nice, and backstage before her first New York catwalk, so amazingly relaxed, surrounded by her family who flew in from Korea just for the show.  After cornering the Asian market, she says she’s ready to take on New York.  “I’m so happy,” she said.  “I love New York, it’s trendy, it’s a mecca for fashion.”

To view an interview with Son Jung Wan, and video of her runway show, click on the Red Stiletto icon below